It is now officially spring. I have cleaned up the yard after the devastation of this winter. This winter should not have been bad, and wasn't that that, until that unusual cold front that hit us in February. Our Dec/Jan typical winter was pretty typical, and everything in the yard held up pretty well. A little tip burn on the more sensitive subtropicals, but nothing extreme. Then after the cold, things started to warm up for us in January to the point that almost every mango in the yard started flowering. But then in February we got a late cold front that brought the temperatures in my yard down to 26 F one night and hard freeze for 3 days. Every mango flower stalk turned black and died and the amount of damage was severe, most plants either dying outright or dying back to the trunk / complete defoliation. I had a papaya that had 3 dozen fruit on it that all froze. See below for the temperature plot in my yard 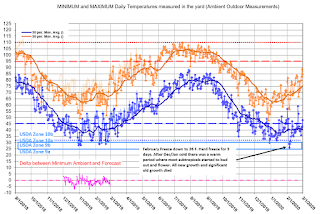 Since then I have been able to assess the damage. Most (but not all) things I had covered up survived and many with minimal damage. But every subtropical that was not covered took major damage. Every citrus tree looks great and took no damage. And because of all the chill, the deciduous fruits all bloomed very strongly. So like with most AZ winters: A very mixed bag.
Posted by Mark (starch on TFF, ourfigs) at March 20, 2020

2019 was not a great year for mango production in my yard. I had way more mangos in 2018, but this winter was very harsh. As an example I got 2+ dozen mangos off my Sunrise last year. But this year I didn't even get a flower off the tree because half of it died back this winter, including all the flowering tips. But despite the setbacks, I did get some really spectacular mangos this year. Here is the roundup of production: 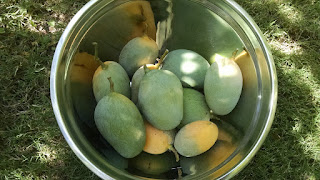 Ate my first Springfels mango from my tree today. It was very good. It is described as a pineapple flavored mango. Pineapple Pleasure is one of my favorite mangos and is very pineapple-y. Springfels is not pineapple-y in the same way. It is more like a very rich classic mango (similar richness to Edward in my opinion) but has a pineapple background complement flavor that makes it a little more refreshing than eating a classic mango.

This is a big mango, like > 1 lb. I have another on the tree still ripening that is at least 2 lb. This one is reported to have a lot of growing and ripening issues in FL, but looks like it makes very good mangos in AZ. 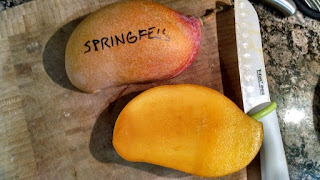 A cornerstone permaculture design approach is to use fast growing trees as temporary canopy until productive trees grow into to take that space in the canopy layer. In the Phoenix desert this becomes almost a requirement (I say almost because you can throw extra water and build temporary shade structures to keep trees alive when there is no natural canopy around, but that is the hard way to go about it). When you use other trees as temporary shade, you get many more benefits than just building shade structures:


However this does require you to think ahead and get your temporary trees established first before you start planting your orchard. This really does pay off in the long run.

I have been putting this approach to good use for years in my yard. I use Moringa and Castor (Giant Zanibariensis) as fast growing canopy trees. And after 1-3 years I take them out once something becomes big enough to occupy that space. I have removed several trees this way. Today I removed two more. 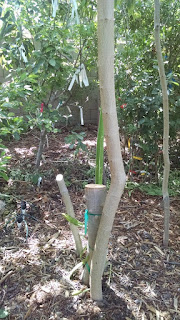 Castor and Morninga were planted side by side to provide shade in my deciduous area. Castor was about 15 ft tall and Moringa was 25+ ft tall and provided significant shade. A Sweet Lavender Mulberry was planted in this area to be a productive tree that eventually provided the canopy in this area. Now that the Mulberry is big enough the Castor and Moringa have been stumped. 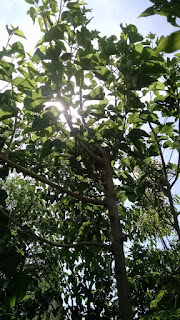